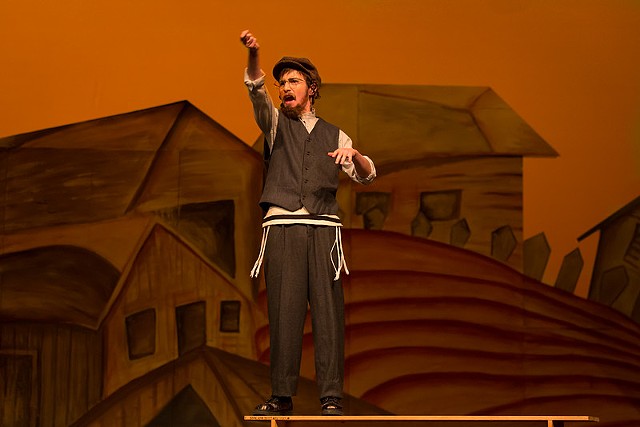 Fiddler on the Roof
< previous next >

The village in this show had been the largest single element in a show I had ever worked on. I thought the "Cabaret" set was big, but not as big as this. I thought the "Sunday in the Park with George" set was ambitious for one person to paint and 2 to build. But this village was a new breed of obstacle.The shop for this theater company is next to the Berkeley Marina, an area of the world that gets fog first in the San Francisco east bay. This show was being built in January and February, pretty rainy months. Between the moisture in the air and the rain, this set built out of particle board and doorskin warped, broke, and the paint ran every day. The pieces only dried out finally once installed and under theater lights. Every day the paint would run, every day the boards would warp. The end result was not a flat wall where the illusion of edges disappeared, the edges shown through like a patchwork quilt. But from the middle of the theater, they weren't too glaring.